I have been working lately on a new song. I plan to write 10 new songs and then record my next CD. I think I’m up to 7 or 8 songs now. Only a few more to go. The last song has some similarities with Hank Williams song “Ramblin’ man blues”, about having the urge to travel and see new places. I played it in public for the first time last week.

I also invested in a new songwriting notebook. I thought it would give good “karma” with something special, so it is a notebook made in India from recycled paper.

I sent off my new song to NSAI (Nashville Songwriters Association International) to get some input. The evaluation came back yesterday and was pretty positive. I don’t think I need to rewrite to much 🙂 . 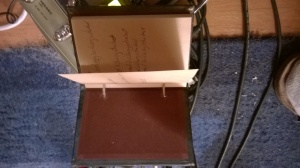